Citizens have tested whether ArtPlayer's mood calming TV streaming and digital signage art service can make blood sampling a better experience. The self-reports from seven participants afraid of having blood drawn pointed to a relaxing effect of ArtPlayer supported by reductions in their heart rates.

Seven citizens, who absolutely do not like taking blood samples, helped to test whether calming art images and music make blood sampling a better experience at Health Innovation Centre of Southern Denmark.

Here, they, along with CoLab Plug & Play, Aalborg University's Department of Architecture, Design and Media Technology and the company Cumedin ApS, which owns the streaming service ArtPlayer, helped investigate whether the solution ArtPlayer has a calming effect on people who are nervous about blood sampling.

Solvej Mathiesen, Project Manager, Health Innovation Centre of Southern Denmark: “In the process, I have had contact with many people who, to varying degrees, feel discomfort during the blood sampling or have had some bad experiences with it. I have got the impression that there is a larger audience that might be helped by something as simple as a streaming service such as ArtPlayer.” 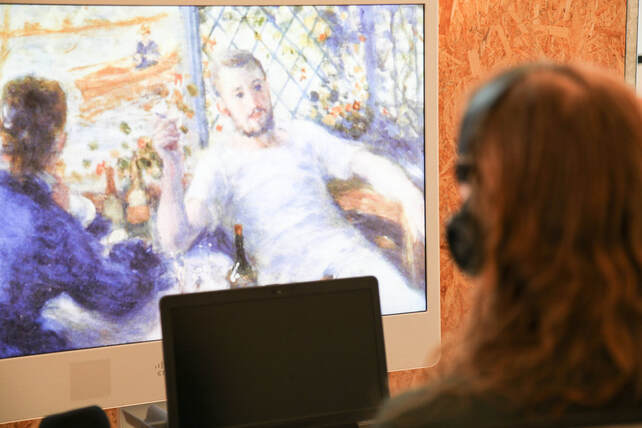 Prior to the test, the test subjects were therefore fitted with a belt for measuring heart rate. During the actual test, the test persons sat in front of a TV screen with calming images and music in the headphones, while their facial reactions were filmed by a webcam.
After the test, data was processed by Aalborg University and a publication of the results is now available.

The main findings of the ArtPlayer testing is summarized in the following:
Hendrik Knoche, Associate Professor, Aalborg University: “Based on the self-reports, ArtPlayer acted as a form of a mentally demanding distraction to people that helped keep their mind of having blood drawn soon by looking at the images. This had a relaxing effect as evidenced by the participants self-reports and reduction in heart rate.”

The ArtPlayer test was partly funded by The Innovation Fund Denmark’s InnoBooster Program.

About Aalborg University
Aalborg University’s Department of Architecture, Design and Media Technology is a multi-campus institute with departments in Aalborg, Copenhagen and Esbjerg, whose purpose is to teach, research and disseminate knowledge within architecture, urban, industrial design and media technology.